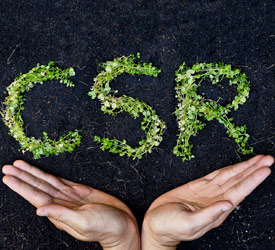 While our Board of Directors believes that the organization should grow in strength and size, it also understands the importance of demonstrating gratitude towards society for its role and contribution to the Bank’s growth. Apart from serving as stewards of the financial system, we believe in showing our gratitude in the form of service and contribution. At Saraswat Bank, Corporate Social Responsibility (CSR) is not a new exercise, it is a tradition.


Our Bank’s founders and their successors intuitively understood the role of cooperative institutions towards philanthropy right from its inception. They were presciently aware that a cooperative institution needed to stay connected with the needs and aspirations of society at large. CSR constitutes the umbilical cord that connects your Bank to society. For an institution that is on the cusp of its century, the archetype of community service was established by its founder, late Shri Wamanrao Varde. His praiseworthy gesture during the Second World War has left its imprint on the collective consciousness of the Bank – when the people of Mumbai were facing a grave scarcity of food grains, late Shri Wamanrao Varde dared to set up a ration shop at Girgaum so as to mitigate their hardships and make available the basic necessities of life. During those days, Saraswat Bank was a community-centric bank but none questioned his philanthropic act even though the Banking laws, Cooperative Laws and the Bye-laws did not have any provision to facilitate opening of a ration shop. With this courageous act, he inked the blueprint for Corporate Social Responsibility, underscoring the importance of a cooperative institution’s contribution towards the larger social good.


Since then, your Bank has been providing financial assistance to many social, educational and medical institutions by way of grants every year from its funds. It has been a forerunner during exigencies like floods, famines, earthquakes, etc. It has initiated scholarships and apprenticeships for deserving students and contributed in shaping the careers of several youngsters. The Bank as a whole aspires to propagate the teachings of its flag bearer, Late Wamanrao Varde and serve the society at macro and micro levels.

Taking a serious note of the drought situation prevailing in various parts of Maharashtra, Saraswat Bank, India’s largest Urban Co-operative Bank which recently crossed a total business of Rs. 50,000 crore, has donated an amount of Rs. 1,00,00,000/- (Rupees One Crore) towards drought relief.

Saraswat Bank is the largest financial institution run on co-operative principles in Maharashtra and is rightly called ‘Maharashtra’s Own Bank’. The Bank has always taken initiatives at the macro and micro level which spell out its vision of Corporate Social Responsibility (CSR) towards Maharashtra.

The Bank has always followed the principle of giving back to society, a part of what it has received. From donations to NGOs to absorbing family members of martyrs of the 26/11 terrorist attacks, the Bank has always upheld needy and worthy causes.